As its name suggests, the My Passport Wireless SSD is based around a fast solid-state drive. During our tests, we clocked it at blazing 350MBps read and 285MBps write speeds during sustained video file transfer, while folders of images shift at an equally impressive 290MBps / 256MBps. But this is much more than just an SSD. It’s a device designed to be used as stand-alone storage in the field, so during a shoot you can back up images from your memory card without needing a computer. This is made possible by the Passport’s built-in SD card reader. Simply insert a card, press the nearby transfer button for two seconds, and the Passport automatically copies the card’s contents to the SSD, with status LEDs showing progress. What’s more, once your shots are on the drive, you can then view them on your smartphone or tablet, as the Passport also acts as a wireless media server with its Wi-Fi hotspot. Even raw images stored on the drive are viewable. WD also claims the device can wirelessly stream 4K video to a smart device, but this needs a video player that supports your camera’s movie files. There is an option to select different video players from a menu, though we had some trouble getting this to work on our Android device.

Powering all this is a built-in battery good for up to 10 hours continuous use. But if you don’t need all-day power, the battery can also double as a 6,700mAh power bank, with a USB output on the drive able to supply 1.5A of charging power. Packing so much tech makes the device relatively large by portable SSD standards: it measures 135mm square and 30mm thick. You can streamline things a little by removing the soft rubber bumper if you can manage without its shock protection for a while. 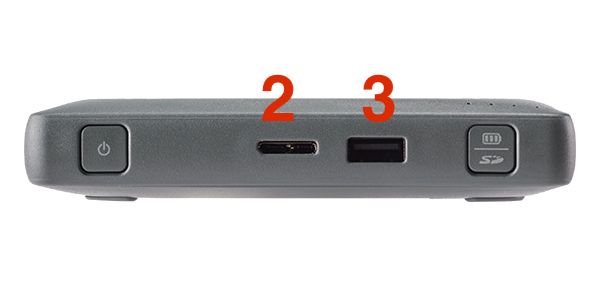 1. Need to back up your SD cards in the field? Just pop them in the My Passport’s SD slot, press the Transfer button and have them copied across to its internal drive.

2. Not using SD cards? Other card formats can be connected to the Passport via a separate card reader attached to a USB 2.0 input on the drive.

3. The internal power bank can be used to charge a connected device while it also powers the Passport. The only compromise is that the charging current drops from 1.5A to 0.9A.

The My Passport Wireless SSD is a refreshingly versatile and high-performing mobile storage solution. Having the ability to quickly back up SD cards on the go to a convenient self-powered drive is great during a long shoot. 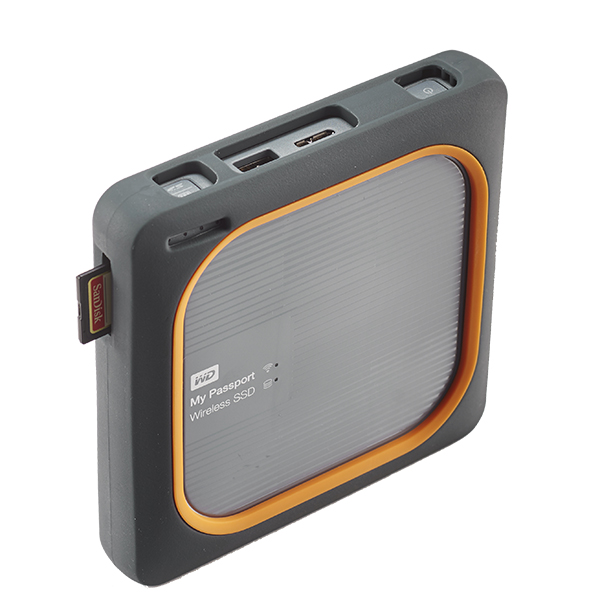