In addition to exhibiting the 6/3/2 series tower and rackmount models powered by Intel® Atom™ dual core processors, ASUSTOR will also be introducing its new enterprise class 7 series rackmount devices (AS7009RD/AS7009RDX/AS7012RD/AS7012RDX), which feature Intel® Haswell  Xeon and Core i3 processors. Also being introduced for the first time, will be an economical rackmount model, the AS-204RS and two other tower model devices powered by Intel® Core i3 processors, the AS7008T and AS7010T.

All users and interested parties are sincerely invited to visit ASUSTOR in order to experience the latest NAS technology and innovative concepts firsthand. 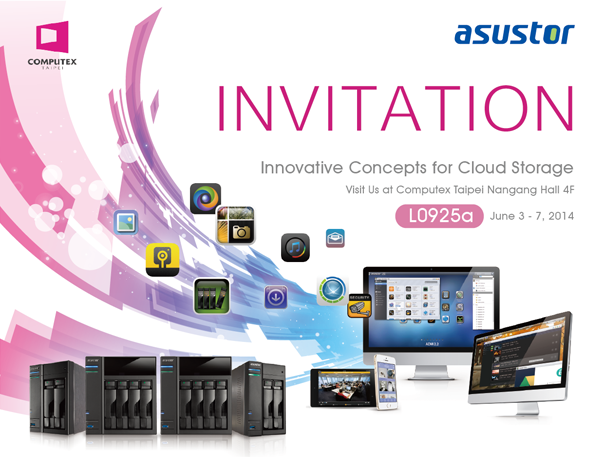 ASUSTOR’s ADM NAS operating system is the first in the world to be designed around an App-based concept. Intuitive, easy-to-use and highly customizable, ADM allows even beginners to easily create a customized cloud storage space for themselves to share multimedia, photos and files. The latest ADM 2.2 version will provide users with a host of new surprises including upgrades to ASUSTOR Portal which now includes direct access to NAS power controls, customizable screensavers, and support for input with non-American keyboards.

Newly added DAC device compatibility provides for an optimized listening experience, while the revolutionary MyArchive storage technology allows users to use hard disks as removable storage archives. MyArchive truly provides “plug and play” convenience as users are free to swap between different data collections and even share terabytes of media archives with friends. This effectively allows for increased transfer performance and the infinite expandability of storage on the NAS. It also allows users to save a significant amount of power by not having their NAS hard disks or an external drive attached to the NAS always powered on. Furthermore, ADM 2.2 will include a more intuitive File Explorer which will feature small, medium and large thumbnail previews, and the mounting of local computer hard disks for one stop file management and transfers.

For more on the newest features and concepts, all those who are interested are invited to visit the ASUSTOR exhibition at Computex 2014.