Kuala Lumpur (30 August 2013) – Canon, a world leader in digital imaging, today announced that three of the company’s photo-imaging products—two digital SLR cameras and an EF lens—have been honoured with prestigious product awards by the European Imaging and Sound Association (EISA). The EOS 6D was named European Advanced SLR Camera 2013-2014, the EOS 100D earned European SLR Camera 2013-2014 honours, and the EF 200-400mm f/4L USM Extender 1.4x was crowned European Professional Lens 2013-2014. To date, Canon products have won a total of 59 EISA titles on 28 occasions and have received awards every year over the past 25 years.

“It was certainly a great honour to be crowned as one of the winners for the prestigious EISA Award for 25th consecutive year. This recognition is indeed a testament of our commitments in providing cutting edge imaging solution to the consumers” said Donny Ling, Director of the Imaging Communication Products division of Canon Marketing (Malaysia).

The annual EISA awards are decided by a panel comprising the editors-in-chief of 50 special-interest magazines from 20 European countries. The awards recognize products released in Europe during the past year that combine the most advanced technology, desirable features, cutting-edge design and outstanding value. Started in 1982, this year marks the EISA awards’ 32nd anniversary.

The EISA accolade for the EOS 6D marks the third major award that has been bestowed on the camera. Before this, the 6D was named Best DSLR Expert in 2013 by the Technical Image Press Association and also received the coveted Camera Grand Prix 2013 Editors Award1 in Japan.

The approximately 20.2-megapixel EOS 6D features the world’s smallest and lightest2 body among digital SLR cameras equipped with a 35 mm full-frame image sensor. It is also the first EOS-series camera to have built-in Wi-Fi connectivity and GPS functionality. The EISA panel noted that the camera offers many of the features and benefits found in Canon’s professional-model full-frame line-up, all at a more accessible price. Furthermore, the judges were impressed by the EOS 6D’s fast and effective AF performance in low-light conditions. Other features that earned praise are the model’s low-noise imaging performance, expanded exposure latitude, high dynamic range, and continuous shooting speed of up to 4.5 frames per second. In summing up their assessment, the panel declared that the EOS 6D “makes a great choice for enthusiast photographers.”

The EOS 100D is the world’s smallest and lightest3 digital SLR camera equipped with an APS-C-size sensor. Despite its diminutive size, the judges commented that the camera “offers a very high level of performance.” Praising the combination of compact size and exceptional image quality, the EISA panel went on to say, “The miniaturized body will appeal to those looking for a small, lightweight and portable camera that still affords the user the controls needed for creative photography. A collection of automatic modes, and touch-screen operation, make the camera very easy to use for those new to photography, but the 18-million-pixel sensor still produces top-level image quality.”

The EF200-400mm f/4L IS USM Extender 1.4x, heralded by the EISA panel as “a great sensation for the optical world [that] opens a new era for professional optics,” is the world’s first4 super-telephoto zoom lens to incorporate an internal extender. The built-in 1.4x extender allows users to quickly and easily extend the zoom range from 200–400 mm to 280–560 mm with the flip of a switch. Also, as noted by the EISA judges, since the teleconverting unit is integrated into the lens’s design, “it can be activated safely in harsh conditions without exposing the camera’s mirror and sensor.” The panel concluded that the EF200-400mm f/4L IS USM Extender 1.4x’s “ultimate optical quality guarantees uncompromised results for sport and wildlife photography.” 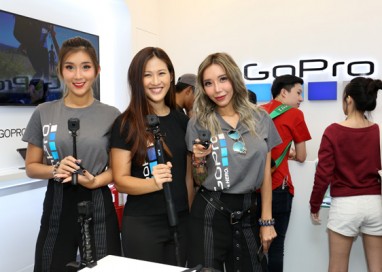